Read about Nancy's books on Amazon.com
Would you like to purchase Nancy's latest novel: NO ONE KNOWS? For a limited time you can buy an autographed hardbound edition for $19.95––including tax, shipping and handling. This is a total savings of over 30%!
Malmarie Press
E-mail Nancy Price

SLEEPING WITH THE ENEMY
A wife fakes her death to escape the most dangerous man she knows: her husband. But cruel Martin Burney discovers his wife is alive, and stalks her in a small town. A young professor there is courting her, but one night she knows her compulsively neat husband has entered her house to rearrange towels in her bath and canned goods in her kitchen.He's found her.
He's out there.
NO ONE KNOWS
A love story, a mystery, and a small town in World War II. What if you want--and deserve--revenge? Miranda is bright, funny and pretty. She loves two men who want her as much as they hate each other. The war changes all three. Miranda has a happy life, and a secret. She keeps it until no one remembers. No one knows.
NIGHT WOMAN
The world thinks Randal Eliot writes during his manic phases, but his wife Mary creates his famous books and supports their family. When Randal dies, no one will believe she is the genius.
She marries a younger man, Paul, a Randal Eliot scholar. Paul cannot bear to believe Mary is the genius—she will destroy his life work and Randal Eliot’s reputation. He has killed before. He must kill again.
AN ACCOMPLISHED WOMAN
When Catherine Buckingham’s parents die, her young uncle, Thorn Wade, becomes her guardian and raises her as her mother wished, so Catherine becomes an adult who is not like the men—or women—of the world around her: she is a sexual creature we seldom encounter. With innocent joy Catherine explores her amorous feelings for the man who has raised her, while Thorn will not take any male initiative by word, look or action. They keep the memory of that summer like a promise they will someday fulfill.
But Thorn must leave to fight in World War II. Catherine is told he is dead, and learns, painfully, how to be like women of the 40’s and 50’s. Yet Thorn is alive, and comes to find a Catherine who is finished, accomplished. How can she face the man who formed her for another life?
A NATURAL DEATH
Three courageous young people, one a new white slave mistress, two captured black slaves--meet on South Carolina rice plantations during the summer of 1850. Black Joan and her husband Will have been raised free, then captured. Their civilized virtues make Joan valuable as a maid in the Big House, and Will soon becomes the black slave driver.
Slavery's subtle poison corrupts the three industrious, warm-hearted young people, slave mistress as well as slaves. They have no choice; they survive, even triumph, just as capable young people trapped in a sick society would survive and triumph today.
BONFIRE'S DAUGHTER
In an echo of THE GOLDEN BOWL by Henry James, a rich father and daughter unknowingly marry two lovers. But in the world of this book, the father is a ruthless Iowa businessman who has earned his name of “Bonfire” by burning down his competitor’s warehouses. His beautiful young wife loves the wealthy life he gives her, but she cannot resist her new son-in-law, and he loves her still.
Their risk is deadly. Bonfire has the money and the power to stop at nothing, even murder. His daughter is dear to him. When Bonfire and his daughter discover the truth, one of them will forgive, but the other will kill.
TWO LIARS AND A BRIDE
Mary Bryant grows up in a dirt-poor Nebraska family, hungry and unwanted. Her only friends are a next-door neighbor and her little half-sister Rhody, but she has to leave them and run away to Chicago to sleep under a hedge and work as a waitress.
Gunther Meyer finds her, marries her, and she’s happy in her first real home with their new baby, Maria. But one day her world explodes: she discovers her marriage to Gunther was a sham. He has a rich young woman for a wife.
Mary escapes to Florida with Maria, only to find that she is being pursued by Gunther, his friend Manuel, and Gunther’s new wife. They find her at Disney’s Epcot, and Manuel forces Mary to take her baby to Mexico with him, and begs her to marry him. But he keeps her a prisoner, hiding her—why? Soon the world’s reporters are on her track—what has she done?

A New work of Fiction

Read a exerpt from my current book project:
MISTRESS AND COMMANDER

“I was born in Sioux Falls, South Dakota and raised in Detroit, but it seems to me that I spent my childhood in books,” Nancy Price says. “At fourteen I saw a poem of mine published in the Detroit News, and there I was: a writer.”

Nancy received her B.A. in English and art from Cornell College in 1946. In 1945 she married Howard J. Thompson, who joined the faculty of the University of Northern Iowa. Their three children, Catherine, John and David, were born in the 1950s.

In 1961 Nancy studied with Philip Booth and John Holmes at Tufts University and began to publish her poetry. “I wrote poems in the hours before my husband and three children woke, and we danced jigs together when the poems, and my stories, too, appeared in the Saturday Review…the Atlantic Monthly…the Quarterly Review of Literature…the New York Times…the Virginia Quarterly Review,” Nancy says. In the next decade more than one hundred of her poems and several short stories appeared in print.

In 1964 she received her M.A. from the University of Northern Iowa, completed further graduate coursework at the Writers Workshop, University of Iowa, and taught at U.N.I. until 1968, when she left to write her first novel, A Natural Death, a story of South Carolina life before the Civil War.

“Atlantic-Little, Brown published my first novel, and I was blessed with a National Endowment for the Arts fellowship and residencies at the Karolyi Foundation in France, the Tyrone Guthrie Center in Ireland and the Rockefeller Foundation Center in Italy. How could I have traveled otherwise? We didn’t have much money.” Nancy says.

Her second novel, An Accomplished Woman, was published by Coward, McCann and Geoghegan in 1979 and became a Book-of-the-Month Club alternate that year. The New American Library published a paperback edition in 1980.

In 1983 two stories of hers were selected in the National Syndicated Fiction Project Competition of the National Endowment for the Arts and PEN American Center. These stories appeared in the Chicago Tribune, Hartford Courant, Kansas City Star, Minneapolis Star, Newsday, Oregonian Northwest Magazine, Miami Herald, Rocky Mountain News and San Francisco Chronicle. In 1985 another story of hers was chosen for this prize.

Nancy Price’s third novel, Sleeping With the Enemy, was published by Simon and Schuster in 1987 and was a Literary Guild alternate and a Berkeley paperback in 1988. In 1991 this book became a Twentieth Century Fox feature film starring Julia Roberts.

The English version of Snake In the Blackberries, retitled No One Knows, was published by Malmarie Press, Inc. in 2004. Her novels have appeared in England, and in translation in Sweden, Denmark, Iceland, Norway, France, Germany, Japan, South America, Korea, Poland, the Netherlands, Spain, Italy, Russia, Finland, Portugal, Slovakia, Hungary, and Israel.

Nancy tried something new when she created sixteen pen-and-ink illustrations, the dust cover and end papers for the American publication of NO ONE KNOWS. She works half the year in Iowa, the other half near Orlando, Florida.

Nancy Price says: “Looking back, I can’t believe that I—a housewife in Cedar Falls, Iowa--saw my poems and short stories appear in magazines, newspapers and books. My novels became best sellers, and have been translated into fifteen foreign languages. A Twentieth Century Fox film starring Julia Roberts was made of my novel SLEEPING WITH THE ENEMY. Surely such miracles must encourage every writer who reads this biography.” 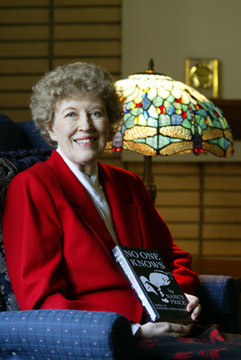