Read about Nancy's books on Amazon.com
Would you like to purchase Nancy's latest novel: NO ONE KNOWS? For a limited time you can buy an autographed hardbound edition for $19.95––including tax, shipping and handling. This is a total savings of over 30%!
Malmarie Press
E-mail Nancy Price

SLEEPING WITH THE ENEMY
A wife fakes her death to escape the most dangerous man she knows: her husband. But cruel Martin Burney discovers his wife is alive, and stalks her in a small town. A young professor there is courting her, but one night she knows her compulsively neat husband has entered her house to rearrange towels in her bath and canned goods in her kitchen.He's found her.
He's out there.
NO ONE KNOWS
A love story, a mystery, and a small town in World War II. What if you want--and deserve--revenge? Miranda is bright, funny and pretty. She loves two men who want her as much as they hate each other. The war changes all three. Miranda has a happy life, and a secret. She keeps it until no one remembers. No one knows.
NIGHT WOMAN
The world thinks Randal Eliot writes during his manic phases, but his wife Mary creates his famous books and supports their family. When Randal dies, no one will believe she is the genius.
She marries a younger man, Paul, a Randal Eliot scholar. Paul cannot bear to believe Mary is the genius—she will destroy his life work and Randal Eliot’s reputation. He has killed before. He must kill again.
AN ACCOMPLISHED WOMAN
When Catherine Buckingham’s parents die, her young uncle, Thorn Wade, becomes her guardian and raises her as her mother wished, so Catherine becomes an adult who is not like the men—or women—of the world around her: she is a sexual creature we seldom encounter. With innocent joy Catherine explores her amorous feelings for the man who has raised her, while Thorn will not take any male initiative by word, look or action. They keep the memory of that summer like a promise they will someday fulfill.
But Thorn must leave to fight in World War II. Catherine is told he is dead, and learns, painfully, how to be like women of the 40’s and 50’s. Yet Thorn is alive, and comes to find a Catherine who is finished, accomplished. How can she face the man who formed her for another life?
A NATURAL DEATH
Three courageous young people, one a new white slave mistress, two captured black slaves--meet on South Carolina rice plantations during the summer of 1850. Black Joan and her husband Will have been raised free, then captured. Their civilized virtues make Joan valuable as a maid in the Big House, and Will soon becomes the black slave driver.
Slavery's subtle poison corrupts the three industrious, warm-hearted young people, slave mistress as well as slaves. They have no choice; they survive, even triumph, just as capable young people trapped in a sick society would survive and triumph today.
BONFIRE'S DAUGHTER
In an echo of THE GOLDEN BOWL by Henry James, a rich father and daughter unknowingly marry two lovers. But in the world of this book, the father is a ruthless Iowa businessman who has earned his name of “Bonfire” by burning down his competitor’s warehouses. His beautiful young wife loves the wealthy life he gives her, but she cannot resist her new son-in-law, and he loves her still.
Their risk is deadly. Bonfire has the money and the power to stop at nothing, even murder. His daughter is dear to him. When Bonfire and his daughter discover the truth, one of them will forgive, but the other will kill.
TWO LIARS AND A BRIDE
Mary Bryant grows up in a dirt-poor Nebraska family, hungry and unwanted. Her only friends are a next-door neighbor and her little half-sister Rhody, but she has to leave them and run away to Chicago to sleep under a hedge and work as a waitress.
Gunther Meyer finds her, marries her, and she’s happy in her first real home with their new baby, Maria. But one day her world explodes: she discovers her marriage to Gunther was a sham. He has a rich young woman for a wife.
Mary escapes to Florida with Maria, only to find that she is being pursued by Gunther, his friend Manuel, and Gunther’s new wife. They find her at Disney’s Epcot, and Manuel forces Mary to take her baby to Mexico with him, and begs her to marry him. But he keeps her a prisoner, hiding her—why? Soon the world’s reporters are on her track—what has she done?

A New work of Fiction

Read a exerpt from my current book project:
MISTRESS AND COMMANDER

Exerpt from
TWO LIARS AND A BRIDE

Our doorbell rang one afternoon when Maria was only a month old and Gunther was at work. When I opened the door, a young woman pushed past me into our living room, looking me up and down. She had a neck as long as Egyptian Queen Nefertiti, and wore a silver chain around it. Her purse was expensive and so were her shoes, and her fur coat was aggressive, like a pelt just ripped from some predator.

“So this is where he keeps you,” she said, looking around her as if the apartment smelled.

She came close, too close, looking me over. I backed away. Maria and I were alone.

“You poor thing,” she said. “Did you think I wouldn’t find out?” She laughed.

“What?” My mouth must have hung open.

“Don’t think I haven’t known where you are.” She went to look at Maria in her crib, and her long black hair almost touched Maria’s face. “I thought so. Gunther’s hidden you away to have bastards. I’m married to Gunther. You’re his—“

That woman didn’t have the sense to back away. I shoved her against my front door. “Get out!” I yelled.

She laughed in my face. “A Nebraska trucker’s by-blow from some hole-in-the-road town called…what is it…Plattberg. A hamburger joint waitress? Gunther’s going to be famous, and he’s going to be rich.” She was so close that I could see that she’d lined her lips red and her eyes black. “Will somebody like you be there beside him then—his little side dish?”

She must have seen the look in my eye—she got out of our apartment quick and spoke from the hall. “Not a chance,” she said. “Here. Take a look at this. Our wedding picture. And we’ve bought a new house in Oak Park—it’s gorgeous.” She threw a newspaper section through the door. “Stay away from my husband! Go home to that shack in Nebraska!”

I slammed the door on her. Her heels click-clacked away.

The apartment seemed too small for someone as furious as I was. I had a mortal enemy I’d never imagined—or was she, simply, insane?

Of course. She was crazy.

But the newspaper lay at my feet. I unfolded it to see Gunther seated in a little newspaper rectangle. His eyes stared straight at me—smiling! And the Egyptian Queen in white held him down with her ringed hand on his shoulder. The article said that Neola Renee Rand and Gunther Charles Meyer had been married September tenth in Oak Park…

I felt as if I couldn’t breathe. I sat by Maria’s crib and stared at her. What had I been doing the day Gunther married Neola Rand, and they had had their wedding night? I’d been lying in bed waiting to have his baby.

I called Gunther. His voice was as smooth and rich as the wickedest kind of cheesecake—you’ve heard him on television. I loved that voice. I loved that man. I would have lived in darkest Africa on the bare ground with him.

He sounded scared. “Is Maria all right?”

“Yes,” I said. But somone’s just been here. She says she’s married to you.”

There was silence on his end of the line. Then he said, “Mary—I was going—“

“Your wedding announcement was in the paper.

I heard Gunther make a small sound like a moan.

“We had a wedding!” I cried. “Manuel was there! We had a minister!”

He didn’t answer. I said fiercely, “Don’t lie to me! The wedding was a fake? We’re not married?”

“No.” Gunther only whispered, but I heard him. I cut him off. I didn’t even say goodbye.

Oh—I was a wild woman! I didn’t know what I was doing. My love for Gunther exploded into hate, like oil you’ve set a match to. Burning like that, I wailed. I shuddered.

I screamed. I dumped my “wedding dress” out of its box and blue tissue paper and stabbed it with a kitchen knife through every lace medallion, as if they were memories I wanted to kill. I ripped that dress. I shredded it. I threw it on our bed, lay on it and howled.

Finally I heard Maria fussing at the noise I was making. I splashed cold water on my face. I had to leave—go! Where? I threw some of my clothes in a suitcase with Maria’s diapers, blankets, clothes, food. I locked the door of my first home for the last time. 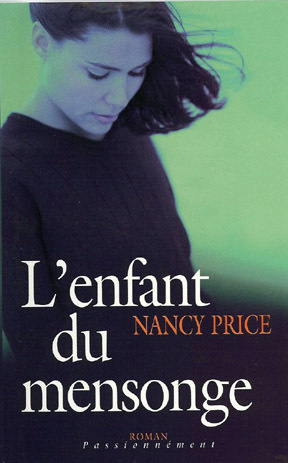